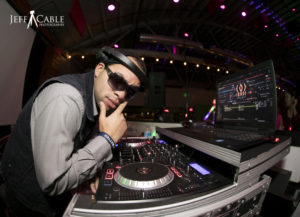 So many things nowadays try to separate us as a nation, but worse than discussing politics or religion just might be asking someone what video game system they prefer. Just the mere mention of it is enough to turn longtime friends into bitter rivals. Amidst all the controversy, however, one man is brave enough to take a stand against the divisiveness. That man, is Caleb Glover.

Caleb imparts the following wisdom to illustrate his stance about this heated debate (and revealing his approach to DJ’ing in the process): “we all have different songs and artists that we love, but at the end of the day, it’s all music.” This analogy is appropriate, since music and gaming have such strong cross-cultural connections nowadays. And just like a successful approach to games of strategy, all of the music Caleb plays on his events serve a specific purpose. Each song plays a part in the story that unfolds from moment to moment, from origin to the final act.

An avid gamer himself, Caleb likely grew up on several classic games, from mega man 64 to Mario Kart, and likens many elements of the gaming culture to being successful behind the DJ controller. “The goal is to get so wrapped up in your character that you feel the story come to life,” Caleb explains, “and I feel the same way when I’m DJ’ing and get in that zone where I read the crowd and can take that party to that next level.” While the pun may not have been intentional, every detail of his DJ set is. He caters to the crowd, to the venue, and even to the theme of the party to make sure he’s fully engaged.

What sets Caleb apart is that he is not just a consumer, but an innovator, as well. As one of Denon & Doyle’s most requested Video Jockeys (mixing live music videos), Caleb is known in DJ circles to push the envelope of performance and find new ways to combine hot songs with equally entertaining visual displays and special effects. His experience with technology and performance pushed him to host a weekly radio show during his time at Sonoma State and even start work on a YouTube series based on (you guessed it) live video game-play.

Even when in full DJ mode (or anytime, really), Caleb honors the gaming culture he loves by dutifully wearing a necklace from his favorite video game series of all time, Kingdom Hearts, right next to his own heart. That kind of sentiment shows depth, dedication, and the desire to go all in on anything he sets his mind to. While the world argues over which is, in fact, the superior video game platform, there is no debating Caleb’s superior DJ skills.